Sometimes fate gives us a chance to do things that we might otherwise miss.

A couple of weeks ago I was updating the cause of death for all the Nursing Sisters in the Canadian Great war Project. When I got to Henrietta Mellett, I noticed that the Cause of Death in Ed Wigneys Roll of Honour was listed as “Drowning”.

Henrietta Mellett was born in Galway, Ireland October 21, 1883, and enlisted into the Canadian Army Medical Corps (No 15 General Hospital) at London, Ontario on 22nd January 1918 . She appears on the 1911 Census, so she immigrated to Canada sometime prior to 1911.

As with any attempt to reconstruct events from over 90 years ago, there is some degree of speculation, but it is likely that her family had moved from Galway to Dublin and was living there in 1918. It is likely that Henrietta Mellett was returning to England on 10 October 1918 after visiting them. She was aboard the mailboat R.M.S. Leinster, with a crew of 77 and 694 passengers, bound for Holyhead, Wales when it was attacked and sunk by the German submarine UB-123 just before 10:00 AM. The Leinster went down about 6 km outside of Dublin Bay. The official loss of life was 501 personnel, and it was possibly higher.

Fate came in to play when I saw that her body had been recovered and she was buried in Dublin. My wife and I were planning an Irish vacation, so last Tuesday, 3 weeks after looking up her cause of death, on a drizzly morning, I found myself in Mt. Jerome Cemetery in Dublin. I located her grave, as well as the grave of Private Fryday, the only other Canadian buried there. Nursing Sister Mellette is buried with her brother and sister, with the Commonwealth War Graves Commission marker atop the grave.

It is very satisfying to be able to be fortunate enough to have found that she was buried there, and to be able to make the trip to the Cemetery to honour her memory. 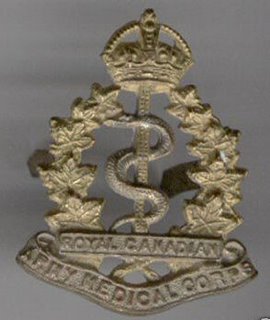 46 of the 3,000 women who served as "nursing sisters" in the Canadian Army Medical Corps lost their lives during the war. Of info available, six were killed or mortally wounded (of which three died in the deliberate bombing of the military hospital in Étaples, France);

15 died at sea, with the sinking of the hospital ship, Llandovery Castle; 15 died of disease; and seven died later in Canada

Short, simple and deeply impressive was the ceremony, says The Canadian Nurse, which took place in the wide corridor just outside the Legislative Chamber of the Parliament Buildings, Toronto, when the memorial tablet to the memory of the nurses of the Ontario Military Hospital, Orpington, Kent, England, who gave their lives during the war, was unveiled by Major Margaret C. MacDonald, R.R.C. Matron-in-Chief of the Canadian overseas military forces.


Family and many persons of note attended the ceremony. Present for the occasion were the near relatives of the heroines whose names appear on the tablet :

Nursing Sister Mary McKenzie,
formerly of Toronto, who was drowned in the sinking by the enemy of the hospital ship Llandovery Castle;

Hon. Dr. H. J. Cody, former Minister of Education, read the memorial service and dedicated the tablet, erected by the matron and nursing sisters of the Orpington (Canadian) Hospital unit.

SINKING OF THE LLANDOVERY CASTLE

At the end of the month of June 1918, the "LLANDOVERY CASTLE" was on her way back to England from Halifax. She has on board the crew, consisting of one hundred and sixty-four men, eighty officers and men of the Canadian Medical Corps, and fourteen nurses, a total of two hundred and fifty-eight persons. There were no combatants on board. The vessel had not taken on board any munitions or other war material. This has been clearly established.

In the evening of 27th of June, 1918, at about nine-thirty (local time) the "LLANDOVERY CASTLE" was sunk in the Atlantic Ocean, about one hundred and sixteen miles south-west of Fastnet (Ireland), by a torpedo from the German U-boat 86. Of those aboard only twenty-four persons were saved, two hundred and thirty-four having been drowned.