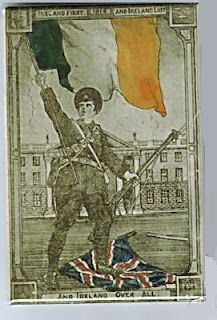 Sinn Feinners Sunday dance The Bawnboy Sinn Fein Club showed its power on Sunday evening, when a body of men proceeded to the Workhouse in the village, and having made a prisoner of the Workhouse Master, held a dance in the boys schoolroom in the institution, contrary to a notice already given that the dance would not be permitted.

It appears that at a meeting of the Guardians held on the 8th inst, it was decided that permission be given to the local Sinn Feiners for the entertainment.

The decision of the Guardians having being communicated to the Local Government Board, the latter body wrote to the clerk of the Guardians was illegal and threatened an injunction in the superior courts.

The Master of the Workhouse, hearing this at once communicated with the secretary of the local Sinn Fein Club, stating that the dance would not be permitted.

Despite this an advance guard of the Republicans made their way to the office of the Master Mr P. McTeigue and imprisoned him there until the crowds for the dance, which numbered over 200 had assembled and taken possession of the boys schoolroom, when the prisoner was released

At Strabane Workhouse in February 1922.
Five or six masked (IRA) men entered the Workhouse and set fire to it in order to stop the local Dorset Regiment occupying it.
Posted by Michael Walker at Saturday, December 01, 2007