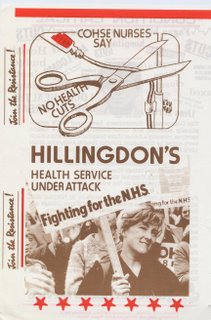 The Conservative Government have since 1979 systematically attacked and undermined Hillingdon's health services, recently a further three hospital -wards and a clinic were closed by Hillingdon District Health Authority.

Since 1979 the effect of this policy in Hillingdon has been:

Furthermore, only a determined 'work-in' by hospital staff and the support of the community saved Hayes Cottage and Northwood & Pinner Cottage Hospitas from closure.

Health workers now believe that only the Labour Party cares, and is fully committed to the future of our health services, after all it was the Labour who established the in 1946.

We therefore urge all caring people to support the Labour Party's campaign to save our health service - if the Tories are re-elected with Edwina. Currie as for Health, the future would be very bleak for the health service user. There would be more health cuts, more privatisation and the gradual dismantling of the NHS.